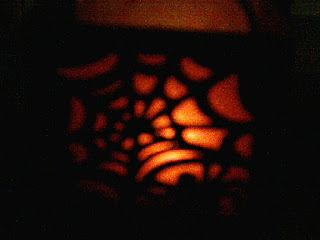 Monday. Rain. It's rained all weekend.  It's foggy and dark. Yuck. No sunbeams!
This might as well be wordless Wednesday, cause I'm just going to take elebenty-seven more naps!
I woke up mama in the middle of dark cause I tipped over my water dish, and I was dying of thirst and it just couldn't wait. I needed water really bad! Since they changed the toilets to water conservative, the water is too far down and I can't reach it. So that option was out. I needed my middle of the night lap of water to tide me over till breakfast. Really bad! So I crabbed at her till she got the message (beans can be slow in the middle of the dark). So now she's tired.  So take a nap! I am!
Beans should take more napssssssszzzzzzzz.
love
brandi
at 3:05 PM 15 comments:

Sorry we haven't been around.  Mama has been busy.  The new door DIDN'T arrive. Tracie was here last Friday (yea!) and we got caught up on stuff, and Monday I missed mama cause she had a pointment and errands to run. Yesterday was fine, but today mama doesn't feel well, and we are not spending a lot of time on here. Just enough to catch up on some blogging friends and that's about it.
We were going to upload a picture, but blogger maintenance has disabled image uploads for awhile today.
I am making mama stop now so I can continue nursie duties.
love,
brandi
at 4:14 PM 2 comments:

Well, it is still warm and nice out.  They say we are going to have a long cold winter and this is nature's apology in advance.  Whatever.  We like this.
We gotted a knock on the door this morning, and it was a maintenance man.  It seems like there is MORE stuff to do in our partment!
They put a door frame between the living room and my room when they were doing the remodeling, but not a door. Next Monday they are going to put in the door.  They said sorry, there was a delay in the order, and the doors just arrived. Mama said never mind to me about the door.  It won't be closed.  That way I can come and go from my room to the living room and the kitchen and my food and water whenever I want to. She said a door is silly.
She is going to cook something called stuffed squash for dinner.  I wonder if kitties like squash? We'll see.  Tomorrow she has movie night, and she has chosen something called Men who Stare at Goats. Sounds kinda silly to me.  Why would men stare at goats? But then, she says it's a comedy, so I guess it's a silly comedy.
Silly beans. *sigh*  What we put up with.
Next Monday is also when she goes to her bean vet.
Friday we hope we see Traci again.  It has been a while since she has come over.
Yawn.... back to warm napsssszzzzzzz
brandi

Update: this kitty doesn't like stuffed squash.
at 3:25 PM 5 comments:

Tuesday, October 12, and there is NO SNOW and it is 70 degrees and the windows are open and it is sunny.
Are we in Kansas any more?  Or, to be more exact, Minnesnowta (Minnesota)?
We'll definitely take advantage of this weather for as long as we can. 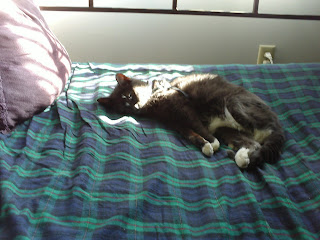 Mama hasn't let me blog for awhile.  Sorry.  She has been once again dealing with insurants and green paper problems, and was kinda upset and over stressed.  I spend a lot of time keeping her company, and even slept with her, which is something I don't really do much. But you know nursie duties!
Anyway, everything is settling down.
And we did do some visiting with other blogs even though I didn't get to blog.
Yesterday, beleive it or not, it was 87 degrees in the Twin Cities!  Wow! I think last year at this time it was probably snowing! Mama was out most of the afternoon, bussing to her doctor and taking herself out to an inexpensive fast food dinner, which is a real treat for her, something she doesn't do very much at all. And she didn't save me anything! Sheesh.
When we had a place near us, she used to bring stuff back for me.
Anyway, we are taking advantage of the warm weather! 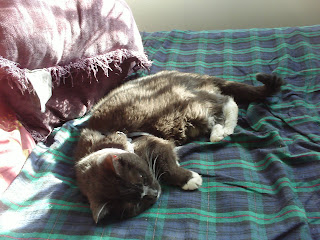 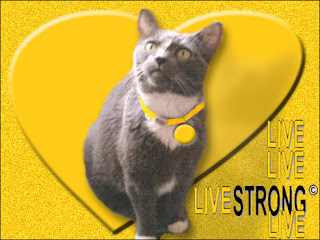 In memory and honor
of Suki, who came before me
and my mama's mama
at 5:30 PM 6 comments:
Newer Posts Older Posts Home
Subscribe to: Posts (Atom)