Update on inspection- and a peek

Ooh they turned the water off yesterday.  And they are turning it off tomorrow, too. Mama was good last time and made sure my water bowl was clean and full and that she had some water, too, so I am not too panicked. They are fixing the water heater or something in the building.
She took a bunch of pictures of the partment, and, of course, me curled up on my rocking chair, so I made her promise to upload them and let you all see.
Tracie is coming on Friday! She called today to see if we passed the inspection.
Of course we did.  And she helped.
Next inspection (we hope) will be next February!!
And here is a peek of what was going on: 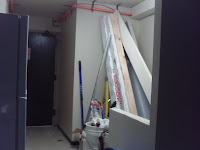 Yes the frigermator was in front of the microwave. And a new wall was built.
New pictures coming. We promise.  But mama likes to tease.
love and hugs to all,
brandi
at 3:41 PM 1 comment:

Just wanted to give you all an update.  Tracie was here to help mama on Friday move some stuff and clean up a bit, cause mama was really hurtie.  In the middle of everything the bug guy showed up.  The nice one I really like ( and so does mama).  He asked if they could come over to his house and clean it, too.  And laughed.  And when I went under the bed (well, he was in my room, so I left) he told me I had to  leave cause he had to do the mop board by me and he didn't want to spray me by mistake.  So I moved.  He IS really nice.
So mama still has to do the dishes and stuff, but the bedroom is clean and the bathroom is clean, and stuff is clean and moved around in the living room. She is going to move some books around, and some of the nick nacks and stuff, but that's it.  We have a nother inspection on Wednesday.  Won't they be surprised.  The place looks totally different.
There was a really bad storm last night.  We even lost power for a couple of minutes! And mama wanted to comfort me, so it was okay.
take care,
brandi
at 9:20 PM 2 comments:

Mama has been busy all afternoon washing pots and pans and stuff and putting them away. By 9 this morning the cool air conditioner went on, cause it was getting really humid. It is now almost dinner time and it's 90 degrees F. out. Whew.  It is nice in here. Otherwise, standing over a hot steamy sink would have done mama in several hours ago. As it was, she plugged in her small desk fan on the fabulous new kitchen counter.
I know, still no pictures.  Would you believe that she still hasn't even done the glasses, bowls, dishes, and the microwave bowls she stored away last fall?  They are still in two tubs. And still has some tupperware kinds of stuff to wash, and her travel mugs (yes, there are several. Three with no handles and one with).
Mama is going a little slow.  She hoped to have the whole kitchen done by today, but her back is keeping her off schedule.  Still, it doesn't stop her from occasionally cuddling me and making sure, a course, that I have plenty of foodies, water, and denties.
I was distracted this morning from my morning denties cause one of the construction workers camed back to put something called a kick plate on the outside of our new front door(?) I didn't like the drill.  Mama thought the worker was hansome.  We did denties later.
Mama has lots of stuff to do by the end of tomorrow.  Thursday she has a pointment and is hoping to have pictures up. At least of the kitchen.
keep kool kitties,
love
brandi
p.s.  mama forgotted.  The neighborhood parade is today!  Guess we aren't going in this heat.  And can't hear  the bands with the a/c on. Oh, well, there's always next year.
at 5:40 PM 4 comments: 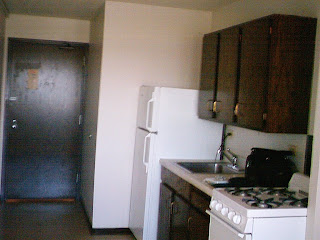 GOODBYE OLD KITCHEN!
THIS IS BEFORE!
The kitchen and bathroom are done! We gotted a new mirror in the bathroom, a new sink, and a small cupboard.  We gotted a completely new kitchen with cupboards and a nice countertop and drawers and stuff.  We gotted a suprise cupboard that's actually in the living room.  We gotted new doors for the front door and for the bathroom.  We gotted accordian doors for the closets (no, they don't make music, thank Bast). We gotted new tile around the sink and stuff.  But we also gotted lots and lots and losts of dust. And crap on the floors.  And my cuddle cup is missing!
So mama doesn't want to take pictures until everything is clean again and back to some kind of order.  I'm hoping for this weekend sometime.  So stay tuned.  She has pictures of before above, and will have pictures during and complete after pictures soon.
My sweetie is going to come over! My cuddle cup is gone, but we have the whole day bed to claim as ours.
Tracie isn't coming over til next week.  :-(
love to all,
brandi

We will not be here for the next couple of days.
WE ARE FINALLY  GETTING OUR NEW KITCHEN!
{{{{{{happy dance}}}}}}
I have to be in my PTU Thursday and Friday and we get to stay in the upstairs lounge during the day. And mama boughted some new Dentabites for me to take with us.
Pictures soon!
{{{{{{happy dance}}}}}}
brandi
the bad news is mama didn't win the Archie bear. :-(
at 8:52 AM 7 comments:

Once again, here we are!

Mama had a surprise last week.  She had both her sisters and one of her brothers come and visit. Both sisters have seen our partment half done (last fall) and couldn't believe it wasn't done yet.
And I didn't even budge (the rocking chair is MINE).
We love the new bathroom floor, and mama gotted me a new litterbox, since she has a new toilet.
They have a drawing for a Christmas bear, a Harrods bear named Archie, at Harrods (that's a British store, for all you non-UK bloggers). Mama loves bears, so she entered her name.  She also liked a Beefeaters bear there, but there was no contest for it.... Winner to be emailed by June 16th....
Cross your paws, friends.
I still miss Lizzie (she was our neighbor french poodle). Mama said she wented to the PetSmart with her siblings (among other places) and looked at all the kitties (no, I am not jealous. Mama has a big heart and there is a rule here about one cat per partment).  They were all napping (of course).
They also wented to the grooming area and saw some woofies getting fur cuts. One of her sisters said one of the little woofies looked sort of like her Molly, and she was really scared.  The other woofies didn't look scared.
That's the news.
love,
brandi
at 6:43 PM 6 comments:
Newer Posts Older Posts Home
Subscribe to: Posts (Atom)