I don't have a pirate dress, and I don't speak Pirate, but here's my pirate pictures for today's special day: 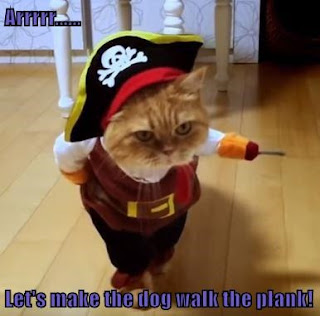 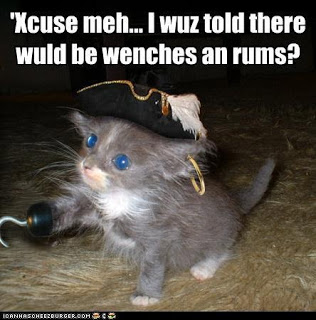 We're doing okay here.
Last Sunday early in the morning someone pounded on our front door and woke us up.  But Mommy wasn't really too awake and transferring from our bed to the wheelchair was a scary idea for her  (and I was sure it was for her, too).  So they went away, whoever they were and we were very grateful Mommy remembered to lock the door! We just snuggled back together and we went back to sleep.
Monday Mommy had her monthly visit  to change her catheter but had forgotten to arrange a ride through her insurants so she called our old friends the MetroMobility bus.  When she was done with her ppointment they were a half hour late picking  her up (in a really bad rainstorm, so that was sort of a good excuse, plus traffic and all the construction). It also took over an hour and a half to get home (we live about a mile from the clinic she went to). She said they drove all over south Minneapolis (we live in Nordeast Mpls), so she got to see a lot of stuff she used to live close to. A new Target, a restaurant where her old bank used to be, lots of new condos, a new Walgreens, one of her old grocery stores totally remodeled, that sort of was entertaining for her on the way home. But there were three people still on the bus when she was let off who still had to go to the northern suburbs. She felt sad for them.
But I missed her. And she filled my water and foodies and went directly to bed she was so tired out. We got to snuggle.
Anyway, this evening she's ordering from a more expensive store. But they had what they call BOGO sales, buy one and get one free. So she got lots of stuff half off.  It wasn't a big order. Just some of the sale stuff. But she did mention she got two sausage pizzas, and we don't have pizza that often. Yummmmm.
We also got to talk to Chewy today. We had to delay our next delivery cause we are really stocked up right now. Mommy told them Quinnie thanks them.  I was sitting right there when Mommy called!
So Happy Talk like a Pirate Day!
love ya,
Quinnie Makayla
(sort of a Pirate lady, so woofies are not really walking the plank here)
at 11:45 AM 9 comments:

Mommy was being silly again. 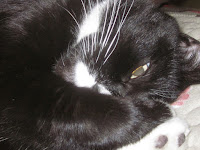 We had groceries delivered today and she had hit the shampoo key on the puter 5 times when she placed her order! She called them, laughed at herself, and they came back today to pick up the 4 she didn't need.  Now if she gets heavy fingered and orders two or three cans of the same soup, well, we'll eventually eat them.  But 5 bottles of shampoo? That would take a couple of years and too much storage space (we're trying to move, ya know)!
It is yucky dark out today, probly going to rain. So Mommy is staying at home. She has a couple of things to do, cause guess what? They are doing another bug inspection Tuesday. She doesn't know whether to be insulted, pissed off or laugh at their waste of housing money. We don't HAVE any bugs!
Mommy got shots in both her knees at the doctor's office yesterday.  It's sposed to take up to a month to  work (Arthur-itis, ya know) but this stuff, if it works, is good for 6 months and won't bother her diabetes. She says it is NOT courtazone.
She couldn't think of a reason for me to meow and meow when the delivery people left.  Then she checked my water, which was totally blocked off by the waste basket and the recycling bin. Important stuff! It's all fixed now. I got some "good girl" pets, too.
We are such blessed kitties, aren't we?
Adopt a shelter pet or a rescue animal!!!!
love ya,
Quinnie and her Mommy Carol
And stay safe and happy those of you who have Labor day weekend.
5 bottles of shampoo. Tee hee. Mommy and I are still laughing.