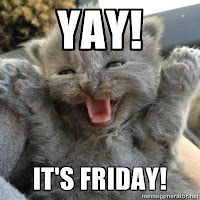 Well, we were sposed to have an inspection Thursday. But then Mommy read the paper wrong and it's next Thursday. The new manager stopped in and asked us if we needed to be sprayed for bugs, and wanted to know why we had dead bugs outside our partment (We baited?? And it worked???  And we will be doing it again, too!). So they said they would be back on Thursday to spray. Fine. Wednesday we had our friend in the building clean our floors and take out garbage. Thursday afternoon the bug guy came. He pulled open the pantry (well organized now) door and got on the phone and said Mommy kept garbage in the pantry. Mommy immediately said there was kitchen stuff, lids and stuff in a bag, not garbage! Well, we still have a few bugs (we wouldn't have to bait if you came once in a while and did a good job spraying!). Just not very many. And the guy then said, well you still have bedbugs, too (how could he tell from standing in the kitchen??? Besides, we don't!!!) He said take everything down off the top of the frigermator and he would try his best. And put the cat up and leave for an hour. He'd be back. Aren't we on assisted living?? Well, we aren't really qualified, and Mommy doesn't want someone else managing all her money, which they do on assisted living. We made that decision a long time ago. So it was none of this guy's business.
And the guy kinda did insult both of us. Not only the remark about garbage in the pantry and bedbugs in the partment without looking or the crack about assisted living, but the remark that he would be back.
Well, he wasn't! Now, that was purely rude!
At one point he asked where I was, and didn't like Mommy's answer ("I don't know"). Like I can't be an independent cat and have to be watched at all times? I don't come when called, either. Well, sometimes I do, if there is food involved! I have several places to be in the partment!! Even though it is small. So she doesn't always know exactly where I am.
Mommy and I are kinda pissed. I was in that kennel for a lonnnnggggg time waiting for us to leave!!! Mommy didn't think she could do much besides waiting for them to come back, so she wasted a lonnnnnggggg time, too. Finally she got up and let me out of the kennel.
So we didn't have a lot to be thankful for on Thankful Thursday other than the day was actually a lot cooler than it has been in quite a while.  And it's going to get hot again, but we loved being cooler for even a little while.
Mommy had some interesting smelling pasta last night for dinner, but she didn't let me have any. That was unfair, too, to me. She said it was good. Oh, really???
Well, it's Friday today, and Mommy said we won't have to be insulted again until next Thursday.
Believe me, that is a plus! And maybe she'll share her food?
Have a good weekend ya all!
love ya,
QUINN

ps. NEWS!!.Well, the bug guys work for the place we live, so I can't really complain. They know them and trust them (we don't know why). There was a really nice outside place that had the contract before and they were good. I guess the budget got cut!
Mommy lives on her social security and we make things stretch, but we are not going to let anyone take all our money and put us in assisted living (well, we wouldn't have to move, cause part of this place is assisted living, but still).
We got a phone call this afternoon from the new manager. She's siccking the social worker on us next week. We don't like her, either. She will tell us to give me up, give up cable and the computer network, give up most of her stuff, and live in poverty with people telling mommy what to do. That is what we are facing. Oh, and the people who pay her salary are the assisted living place's owners.
We really want to move!!!
I don't want to lose Mommy!!!!!!
Wish someone could get us out of here. We already live in public housing and there is nothing cheaper. Help!!!!!
We have faced this time and time again, only this time the manager is meaner!
at 6:30 AM

We just don't understand why people have to be mean to each other.
If you are managing, they should leave you alone and show respect!

Some apt managers can be jerks! We sure hope things get better for you there and your wheel chair comes through soon. (We read your previous post saying another month to your wheelchair evaluation.)