Oh, it's Magic out There

The scene outside my windows before mama camed home yesterday: 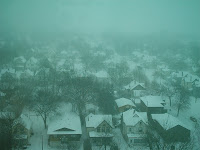 Well, actually, it was worse.  It started snowing and then the visibility became less than half a mile ( couldn't see hardly anything) and it snowed 3 inches total for the day. I couldn't wait for mama to get home!
She said she haded two rotten rides, one going downtown where the guy couldn't figure out how to get anywhere, like he was maybe a tourist and drove round and round trying to find the IDS Center middle of downtown, and the Y (which is pretty easy to find) and the one coming home that insisted mama was on the wrong side of the IDS Center (pretty big place) even though she was outside under the address sign, and he maded her walk all the way across the Crystal Court and she pointed out that the address sign he parked by was not where she requested to be picked up at.
But she said she gotted her stuff done downtown, and she even had something called a Skinny Peppermint Mocha because she had a coupon.  And she was by the Love from Minnesota store, which was busy and decorated all up for Chrissymouse, and she wented in and looked at some cards there that had kitties on them. I guess she was missing me like I was missing her. So she needed a kitty fix.
Oh, she said, the IDS Center and it's Crystal Court were pretty too.  They had their fountain going, which is always pretty (pretty thirsty making if you ask me), and a big Chrissymouse tree and a Menorah ( a very nice thing to do so as not to forget our Jewish friends who also celebrate this time of year), and lots of sticky little beans looking cute (hmmm, really?) and famblies to go with them (to make sure they don't attack any strangers).
So when mama gotted home we snuggled a lot.
She didn't share her roast beast, but she broughted home some banana bread, so I forgaved her.
Today we can hear the sound of shovels.  And we get to snuggle all day. *sigh* A very very nice day even if there are no sunbeams. Hope you have a sweet Sunday.
love,
brandi
at 9:13 AM

I hope you at least found one sunbeam :)

I see you have our button in your sidebar for HOliday Happenings, thank you.

WOW! So much snow! Hope your Sunday was cosy! xx